Interview with Marie-Camille Pitton, Secretary-General of the CARO Centre

To mark the launch of the OHADAC Regional Arbitration Centre (CARO Centre), KARUMAG magazine published an article on “Export: how to ensure the legal security of your business?”.

This article appeared in the September edition of KARUMAG magazine, published by the ‘positive media' EWAG company. EWAG is a company that publishes free magazines specialising in the paper press, web and events since 2008.

Through its network which spreads across the Caribbean, mainland France and the Indian Ocean, EWAG offers socially responsible publications that aim to highlight the players who help to develop overseas regions and their economies.

The article contains an interview with Marie-Camille Pitton, Secretary-General of the CARO Centre based in Pointe à Pitre, Guadeloupe, which launched its services on 27 September.

An attorney admitted to the Versailles and New York Bar, Marie-Camille Pitton has worked in the field of international arbitration since 2008, in international firms and at the International Court of Arbitration of the International Chamber of Commerce. Convinced that alternative dispute resolution methods must become more accessible and contribute to the realities of developing regions, she has been working on the project to create the CARO Centre since late 2017.

First and foremost the article highlights the work done by the Guadeloupe Chamber of Commerce and Industry (CCIIG), project leader of the CARO Centre project, and by the association ACP Legal, partner to the project, who developed the project which today benefits from the European Union development funds under the Interreg V Caribbean programme.

The article emphasises that the CCIIG and the CARO Centre aim to offer customised legal solutions to entrepreneurs and business leaders who want to launch in international markets while also helping to support them when it comes to international commercial development.

Marie-Camille Pitton also brings her analysis of the legal context in the Caribbean region and, more specifically, the lack of legal information available to local entrepreneurs who want to open up to the international market.

She explains that the CARO Centre aims to help Guadeloupe to open up economically and encourage international trade by providing entrepreneurs with legal security.

To achieve this objective, the CARO Centre offers effective and affordable services that help to anticipate conflicts and also resolve them, thanks to the intervention of mediators, arbitrators, facilitators and experts, appointed by the CARO Centre.

This work undertaken by the CARO Centre complements the activity of the CCIIG which supports entrepreneurs in their strategies for developing their international activity. For example, the CCIIG has organized a workshop focus on import, so that entrepreneurs can receive training from specialists in different fields and hence master topics such as customs, transport, legal matters (led by the CARO Centre), payments, etc. The first session of this workshop took place on Tuesday 12 October. Following the success of this workshop, further sessions will be held in the coming weeks. The CARO Centre will share details.

The full Karumag article is available via the following link: https://www.ewag.fr/2021/09/centre-caro/ 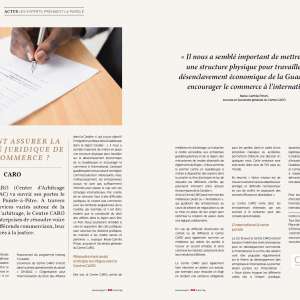